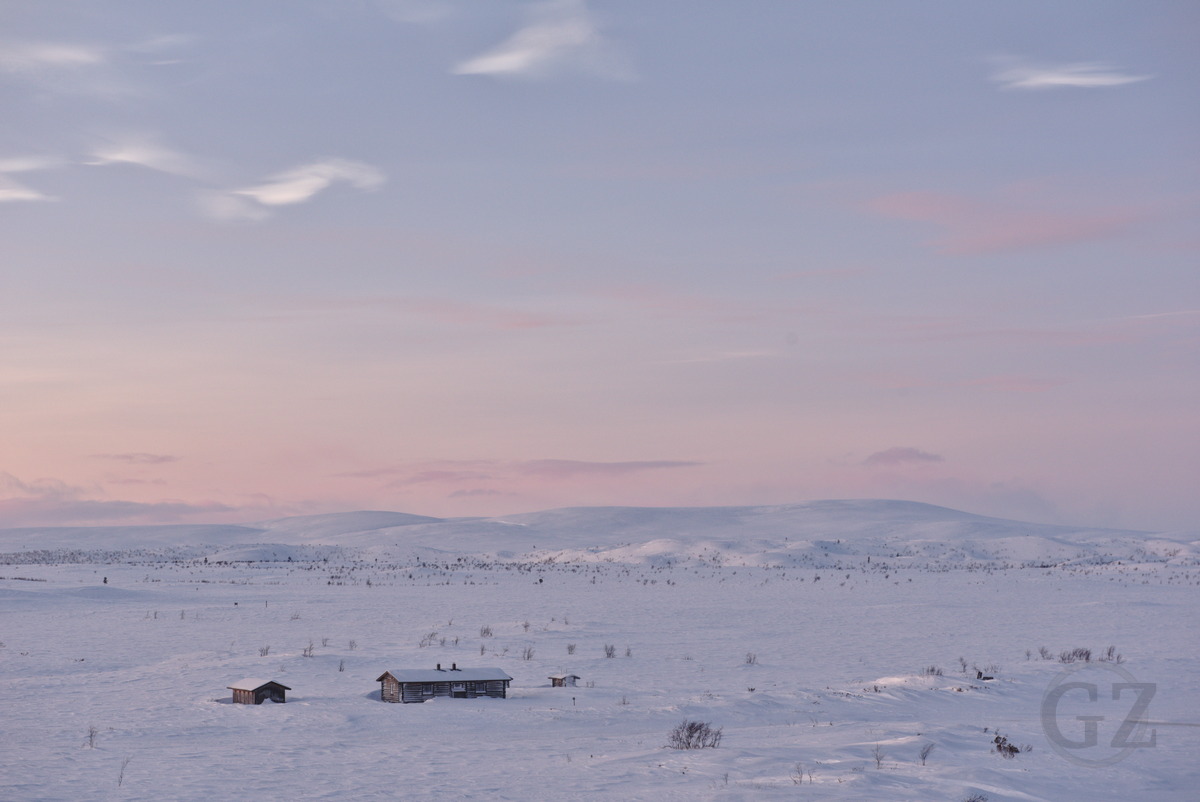 While this winter started early and with low temperatures, the season soon turned more mild than average, bringing lots of snow. A suitable condition for a skiing trip to Pöyrisjärvi, to enjoy the wonderful lights of the polar night.

This winter season started with very low temperatures down to -30°C in October already. Yet, after the initial cold the winter became more mild than usual. These warm temperatures led to increased precipitation, resulting in a thick snow cover. The approximately 80cm of snow are, however, great for skiing. Taking advantage of the beautiful colors from the special light conditions of the polar night, with a friend we decided to go on a skiing trip. After some consideration we agreed to ski up north to lake Pöyrisjärvi.

The first day was rather short and also the coldest of our trip. We only went as far as to the Näkkälän välitupa (open wilderness hut) where we spent our first night. When arriving it was -24°C, yet, at the same time the cold record for this skiing trip. Already previously I passed by lake Olkojärvi on the way to Pöyrisjärvi. Almost as a kind of tradition, also this trip brought us to the lake Olkojärvi.

Due to the short day light time (or rather twilight time), also the skiing distances are reduced. Yet, given the deep snow, it took some effort to ski though the forest and up into the tundra. Once arrived, we prepared the snow to build up our camp. Already in the evening when we arrived we experienced strong winds. During the night the noise of the wind shaking the tend kept me from sleeping well. Also in the morning the winds remained strong. As we had both plenty of time and food we decided to sit out the storm in the tent. Thus we stayed at Olkojärvi for another night.

As it turned out, this decision might have been somewhat premature. Around noon the wind settled and we found ourselves in perfect weather: almost clear sky, hardly any wind. Anyhow, a relaxing day in this beautiful surrounding is certainly no harm. Thus we enjoyed taking our time for exploring the nearby surroundings of the campsite. This became even more exciting as polar stratospheric clouds appeared in the sky.

As we got plenty of sleep we got up early on the next morning. After having breakfast in the dark we got prepared for a skiing day. During the night strong snowfall set in. We had to shake off snow from the tent a couple of times during the night. Nonetheless we decided to try making it all the way to Pörisjärvi. When leaving the campsite it was still dark. However, to make it easier we tried to (successfully) follow a snowmobile track over the lake we discovered the day before. Also in the tundra it was difficult to navigate. The conditions were close to a white-out, but eventually we managed to find the right valley. From there on, we only needed to follow our compasses straight north to get to the lake Pöyrisjärvi.

After 8 hours of skiing in a snow storm with only a short 15 minutes break we arrived at the open wilderness hut at lake Pöyrisjärvi just as the night took over again. Because of the snow cover on the tent the night before, as well as the mild temperatures, our mattresses, sleeping bags, tent and so, were all wet. So we were happy to be able to warm up the cabin and dry out our gear. Since this didn’t dry over night we once again decided to extent our stay to two nights. As before, also this day off surprised us with great weather, clear sky and polar stratospheric clouds that were hanging in the sky the entire day.

After all our gear was dry we continued our trip back to Hetta, this time via the Näkkälä village. Once again our skiing day was cloudy with little sight. Yet, thanks to compass technology and some snow mobile tracks we found we progressed fast all the way back to Hetta. We only had one more night rest in-between.

While most of the skiing time there was little sight, we enjoyed two days off. Both days off we had almost clear sky, that got enriched with polar stratospheric clouds. Since we took advantage of the polar night we had the luxury of experiencing the wonderful environment of the Pöyrisjärvi wilderness area. This was even more special thanks to the unique light conditions of this season, as well as the remarkable phenomenon of the polar stratospheric clouds.