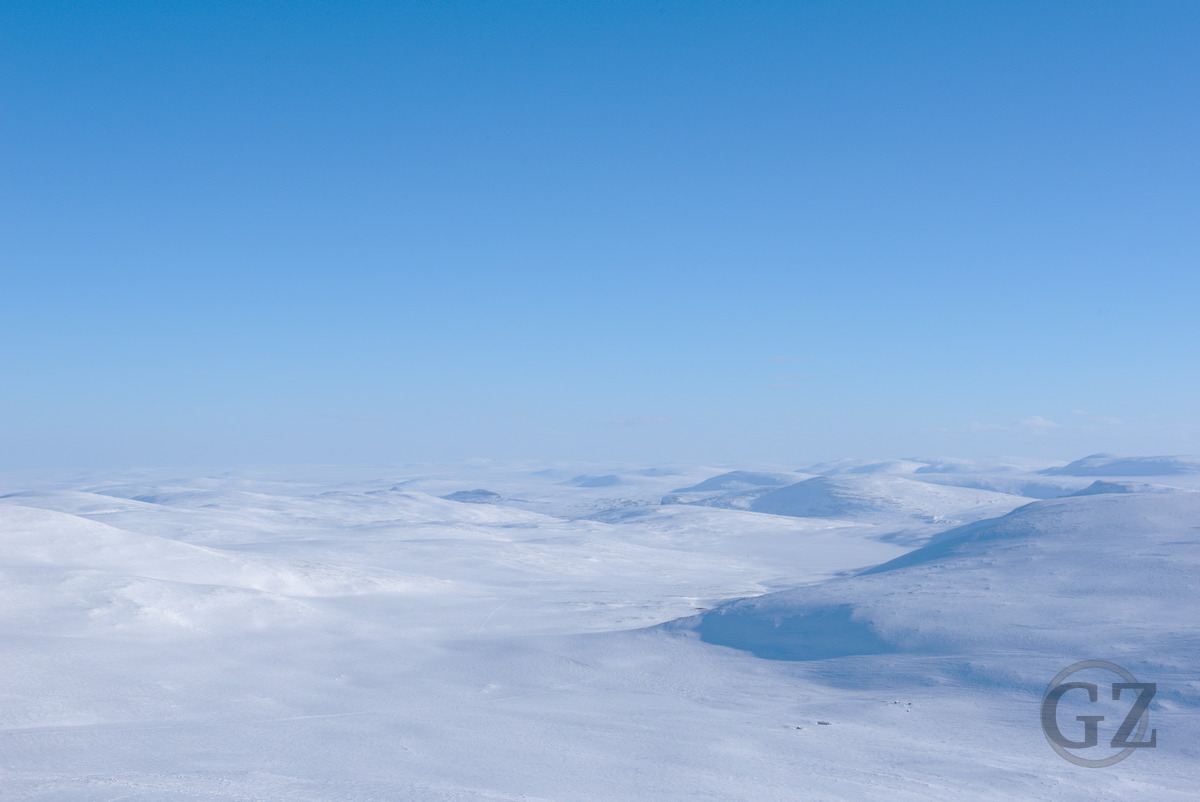 As the temperatures were forecast to get a bit warmer, with a friend we decided to go to the northern part of Enontekiö. Starting from Kilpisjärvi we wanted to ski through the northern part of the Käsivarsi wilderness area. Since there are only few tourists here at the moment, we thought we would try to ski up Halti, which usually is pretty crowded this time of the year ..

In the previous years I have been skiing near Kilpisjärvi a few times. This region is very popular during the spring season, as many people try to visit the highest point of elevation in Finland which is located on the Halti fell. This attracts not only many skiers, but also numerous snow mobile drivers. While skiing through the beautiful nature, this makes one exposed to lots of noise and bad fumes from the exhaust emissions of the stinking snow mobiles. Since this year – due to the Covid-19 pandemic – numerous travel restrictions are in place, we only have very few tourists in the Enontekiö municipality. I saw this as a chance to ski again through the scenic nature in the Käsivarsi wilderness area in the north-western tip of Finland, and potentially as a chance to ski up Halti. With a friend we decided to opt for this trip while the weather forecast showed plus degrees for the Hetta area, reducing the fun of cross country skiing.

We started our trip from the parking area next to the nature centre in Kilpisjärvi. As we arrived rather late that day, we only skied to Termisjärvi, some ten Kilometers from Kilpisjärvi. The route we were following is actually also the winter route that connects Hetta to Kilpisjärvi (a ski trip planned for the future). After a good night rest near Termisjärvi we continued our journey toward Porojärvi, a lake of which I enjoyed its prettiness already some time ago on a different trip through the Käsivarsi wilderness area. As there were only very few people in the area, with my friend we decided to stay a night in the open wilderness hut at Porojärvi.

On the following day it got very warm (up to 6°C), and the snow was hardly carrying our skis. Instead we were often falling through the snow, so we decided to postpone the continuation of our ski trip and to stay for another night. During this day I skied a bit around in the area, and amongst other places, visited the Kekonnen camp. This hut gained publicity as it served as the summer vacation place for former Finnish president Urho Kekonnen. It is nicely located at the Poroeno river, which flows out from the Porojärvi lake. The river is also popular amongst fishers, because salmon is travelling through its waters.

Kopmajoki: snow storm, and white out

After another night at the Porojärvi open wilderness hut we continued our journey north along the Valtijoki river, at the very north-east of the Käsivarsi wilderness area. During the night the snow froze, and apart from some places it was carrying us again. We followed up the Valtijoki river to reach the Kopmajoki open wilderness hut. As the guest books in the cabins we passed by showed there were only few people in the last weeks, we were hopeful to find another empty cabin, which seemed favourable over camping due to the strong winds we experienced most of our trip so far.

When we arrived it was obvious straight away that no one has been there for at least a couple of days: The entrance door was hardly visible, as it was covered by a two meters high pile of snow. After shovelling away the snow we found ourselves in a cosy, little hut. The next morning showed some well-known pattern: wind! However, this time it was also snowing, and in the morning there was hardly any visibility due to the snow storm. As we didn’t want to continue in the white out also at this cabin we opted for a second night. While the sky cleared up during the day, the wind remained strong, and we did not regret our choice to stay there for a second night.

The next morning presented itself in a completely different way: blue sky and little wind. We packed our stuff into our pulks and headed west, towards Halti. While skiing over the fells we enjoyed great views. After about two or three ours of skiing we came down to the valley where the popular winter route to the Halti fell comes up. To our surprise we didn’t see anybody else in the whole valley, so we thought we could give the Halti climb a chance. We continued to the Halti open wilderness hut. While there were some people in one of the two huts, we dropped our gear at the other cabin and prepared to ski up Halti without luggage. Except for my camera.

Thanks to the skins underneath our skies we were able to ski up the summer route to the summit. Once we reached the Halti peak, which is located a few meters across the border in Norway, we stood alone on top of this fell, enjoying fantastic view over a wide area. Inspired and motivated from this great experience, I decided to continue a few kilometres further east, to also ski up Finlands highest mountain: Ritničohkka. Yet, as I got closer to the summit, increasing winds blew dark clouds from the north towards me. Thus I only shortly enjoyed the great view from there, and skied back down into valley, to meet up with my friend again.

After enjoying that day with almost perfect weather conditions we headed back south towards Kilpisjärvi. This day we found ourselves in thick clouds and fog, but we had enough visibility to easily find our way along the well marked route. On our journey back to Kilpisjärvi we spend another night near Kuonjarjoki. The next day brought once again different weather: While the sky was clear and blue, it was very stormy. With wind in the back we didn’t need to do any work, as the wind pushed us including our pulks towards Kilpisärvi. Yet, with side-wind it was quite an effort to move on (fortunately we didn’t need to ski against the wind).

During this trip we experienced pretty much all different kind of weather conditions one could expect this time of the year in Käsivarsi wilderness area. Fortunately there were very few people in the area, and especially we didn’t encounter many snow mobiles. All-together this made the trip very pleasant and enjoyable.