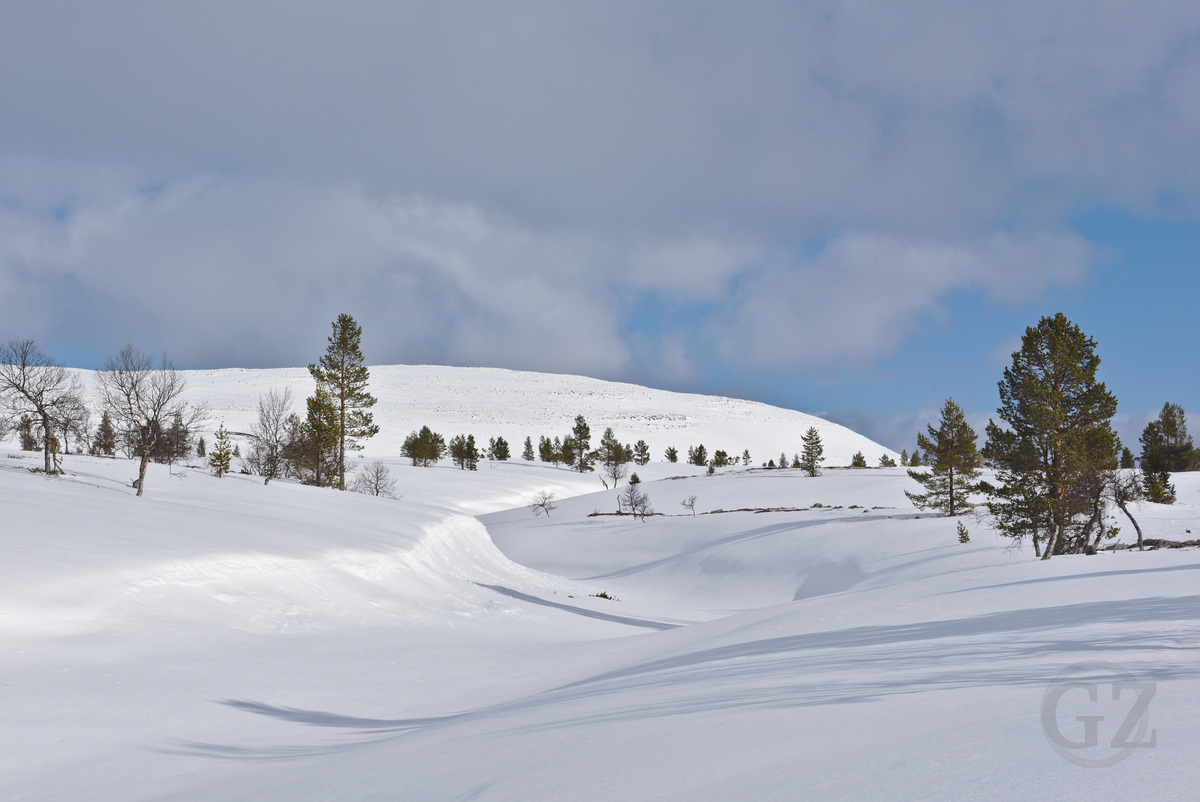 The weather forecast couldn’t make it more clear: Up to plus 8°C and rain next week suggests that the skiing season is at its end. Yet, the snow is still great, so a skiing trip seamed unavoidable: Time for skiing to a to Hannukuru, in the middle of Pallas-Yllästunturi National Park

The weather forecast for the upcoming week predicts temperatures of up to plus 8°C, as well as rain. This is obviously a death sentence to the wonderful snow that is still covering the landscape, with at least 50cm of its white beauty. On the other hand, the forecasted spring weather also predicted sunshine and zero degrees for the weekend. This sounded like great skiing conditions! Thus, before the snow melt finally sets in, there was still enough time for another short skiing trip. Pretty much like a year ago we followed the call of the nearby Pallas-Yllästunturi National Park for the season’s last skiing trip.

Beside its nature and landscape, another nice features of the Pallas-Yllästunturi National Park is the amazing sauna at the Hannukuru open wilderness hut. Usually being crowded during spring time, now in May there are just few skiers to be met in the Pallas-Yllästunturi National Park. While there were some warm days already, making the snow soft and wet, last week the temperatures dropped again below -10°C during the night. This made the top snow layer hard and even allows easy skiing through the forests. Perfect conditions to ski on your own route for a visit to the Hannukuru sauna.

Skiing through forests and over the fells

When crossing the lake Ounasjärvi at the beginning of our trip we first followed the old skiing tracks for a while. However, the tracks were not getting maintained any more since 2 weeks, so it didn’t make much difference once we left them and made our own route. When we figured we were just on the border of the national park we spontaneously decided to follow this line. After crossing the skiing tracks from the Sammalvara route we turned east, into the Pallas-Yllästunturi National Park and up into the fells.

Skiing along this border showed us how important it is to have areas like the national park: While on one side the forest looked older and relatively untouched, outside the national park we skied along forests which were significantly impacted from forestry industry. This included also spaces with clear-cut areas, which made the border line of the national park very visible.

While skiing through forest area we took little notice of the changing weather conditions, between sunshine and snow showers. After skiing up to the open area, these contrasting weather circumstances became clearer. Yet the sight remained well enough during the whole day that we had no problems navigating along the west slope of Rautuvaara. The goal for the day was to reach the Rautuoja open wilderness hut, which is located on the wester side of the national park. While I have been at the Rautuoja autotupa just a couple of weeks ago, this route was new to me. Nonetheless, it wasn’t too difficult to find the hut again, which is located in the forest and not visible from distance. Due to the rather deep and steep valley where it is located, it makes life easier to ski down on the southern side of Rautujoki brook, when attempting to reach the hut. An additional challenge while skiing this time of the year are brooks and rivers, which already opened. Fortunately there was still enough snow that in some either wind-exposed or rocky areas snow bridges where left. Yet, at some brooks it was already necessary to follow the stream in order to find a suitable spot.

After spending one night in the Rautuoja open wilderness hut, the next day was planned as a short skiing day. We only wanted to cross Outtakka fell, on the way to the Hannukuru open wilderness hut. Despite the occasional snow falls during our trip, the slopes of the fells were already icy from the warm temperatures during the day. In some places the snow already started to retreat from the fells.

Entries in the guest book of the Pahakuru open wilderness hut revealed that we were not the only skiers in the area this day. Yet we actually didn’t meet anybody so far. And also at the Hannukuru open wilderness hut we were the only guests. After arriving there in the afternoon, we soon started to heated up the sauna. To get some fresh water we opened an ice hole in the lake, just next to the sauna. The ice there was still about 40 cm thick, so that was a little bit of work. Yet, it allowed us to get easy access to both: water for showering as well as fresh water for drinking.

From Hannukuru back to Hetta

With the wonderful sauna evening behind us, on the next day we skied back to Hetta. Like on the way to Hannukuru we avoided the regular skiing trails. Instead we skied through the Porttioja pass and along the east slope of Rautuvaara. As on the previous days, the weather kept changing constantly between sunshine and snow fall. This inconsistency consistently followed us also through our last day of this short trip.

While the snow remained hard and good above the tree-line, we realized only in lower altitudes that his day did not just feel much warmer than previous days: When skiing again through the forest, north-west of Pyhälkero autiotupa, the snow was already wet and soft. It did not hold anymore as good as the days before, and we were starting to break into the snow. Consequently we decided to ski the last few kilometers on the old skiing tracks. That the end of the skiing season was near also became visible when crossing lake Ounasjärvi again: All the poles, which were marking the skiing tracks, had already been removed. This way the lake almost looked unusually empty. And indeed, we were the only people on the lake while crossing it.

That’s it! –> Skiers into the storage room.

The snow conditions this weekend were still pretty well for skiing. Despite the changing weather, we also couldn’t complain about it, as we had plenty of hours of sunshine; not at last because the polar day will start in a couple of days, which is why daylight already remained for the whole time. In the off-season there are only few people in the Pallas-Yllästunturi National Park, which makes it a calm time to be there. All combined, this was a great weekend to say good by to the skiing season and to get mentally prepare for the summer.

After arriving back home and checking the weather forecast again it became clear that it is now time to put the skiers into the storage room for the summer.