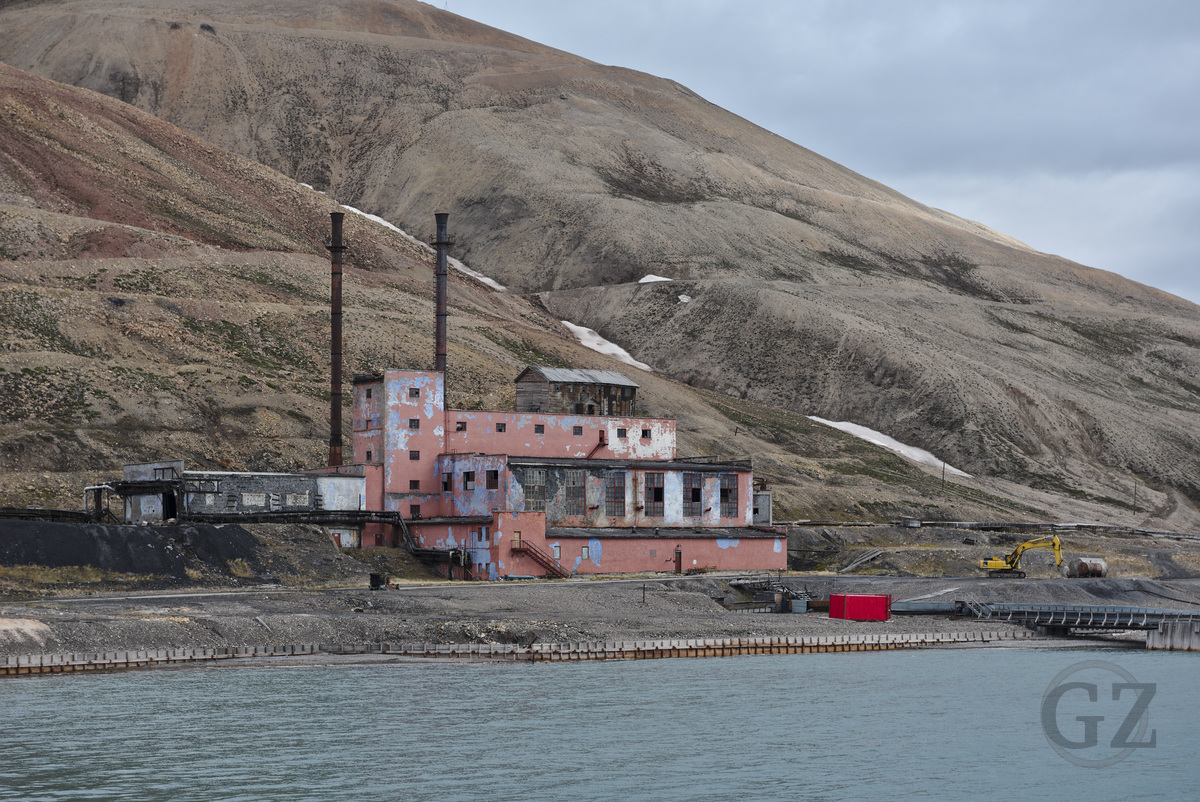 During our visit to Svalbard, Pyramiden was one of the place that my traveling friends and me were eager to sea. The settlement gives a great example of sustainability challenges to single industry towns. Staying there overnight, we had the chance to see several buildings from the inside. For the time being, Pyramiden appears almost like a ghost town ..

Already in the 1920s, Swedish interests in the extraction of Arctic natural resources led to the establishment of this settlement on the Svalbard archipelago. Due to its extraterritorial state, regulated by the Spitsbergen treaty from 1920, any party of the agreement is allowed to extract natural resources on the archipelago. Yet, shortly after the settlement was found, it got sold to the Soviet Union in 1927. Until today the settlement remains Russian. That is, maybe rather Soviet. The town has been left in 1998, but buildings and remaining interior are still in Soviet style. While it was announced months ahead that Pyramiden will get evacuated, there was little belief this would actually happen. However, suddenly a big boat docked at the harbor and people were told to only have 3 hours time to be on board. Thus, little preparation has been done, and many items appear to just have been left as is.

During its peak, Pyramiden was inhabited by over 1000 people. The settlement was found in order to extract coal. Some mine entrances can be seen in a mountain with a pyramid like shape, where the town got its name from. During Soviet times, the town had all the amenities that can make city life pleasant: A hospital, sports hall, swimming pool, culture center, kindergarten, school, canteen, etc. For the people who worked in Pyramiden, all these services, including living, was free of costs. This on top of a salary which was approximately 7 times more than the Soviet average. Some some supplies, such as bricks or vegetables, were produced locally. Most other supplies were shipped in from Barentsburg. Beside Pyramiden, Barentsburg is the other Russian settlement on the Svalbard archipelago.

When the coal extraction was not profitable enough to keep Pyramiden in business, the decision was made to close the settlement. In some online sources the settlement is regarded as abandoned. Yet, as a person working as a local guide explained us, Russia considers Pyramiden as being in a preserved state: It has not been abandoned but put in conservation. this means, that there is still maintenance carried out. Consequently, many building look still in very good shape from the outside. Unfortunately there was a period when no one took care of the settlement. During this time, vandalism and theft (probably to get some Soviet souvenirs) lead to a lot of damage and chaos within the buildings. Currently – as in summer 2017 – there are 9 people living in Pyramiden: 7 are working related to tourism, and 2 are responsible for maintenance work.

The Period of Tourism

Since about 10 years Pyramiden is again being maintained and slowly prepared for tourism. Recently the hotel Tulip was renovated and opened again. There it is possible to either book Soviet style rooms or modernized room which are absolutely top. So is the food that is being served in the hotel. Yet, in Pyramiden the prices are less than a half of what you’d pay in Longyerbyen, which is under Norwegian administration. The hotel bar also serves (delicious!) beer on tap, which is made in Barentsburg. Yet, the Barentsburg brewery is not the only one on the Svalbard archipelago: In Longyearbyen the “Svalbard bryggeri” also crafts tasty and delicious beer. Tourism is still a young and underdeveloped activity in Pyramiden. However, it seems unlikely that further developing this sector could ever bring back this settlement’s former glory. Even though Longyearbyen shows that tourism has the potential to replace mining as the main industry.

In winter it is possible to reach Pyramiden by snowmobile. In summer there are almost daily boats going to Pyramiden. Many of these boat trips also include a guided tour in Pyramiden. As we got told, there are also increasingly smaller cruise ships landing in the settlement. With my friends we treated us with the luxury to also overnight in the local hotel and to explore the city beyond the short tours that are offered. Moreover, we had the pleasure to try the delicious beer and food at the hotel. Visiting Pyramiden certainly turned out to be an interesting visit. The atmosphere is truly unique! But as a researcher, it was also exciting to see what happens when a city fails. The remains of Pyramiden are an impressing testimonial of socio-economic sustainability challenges in single industry towns.