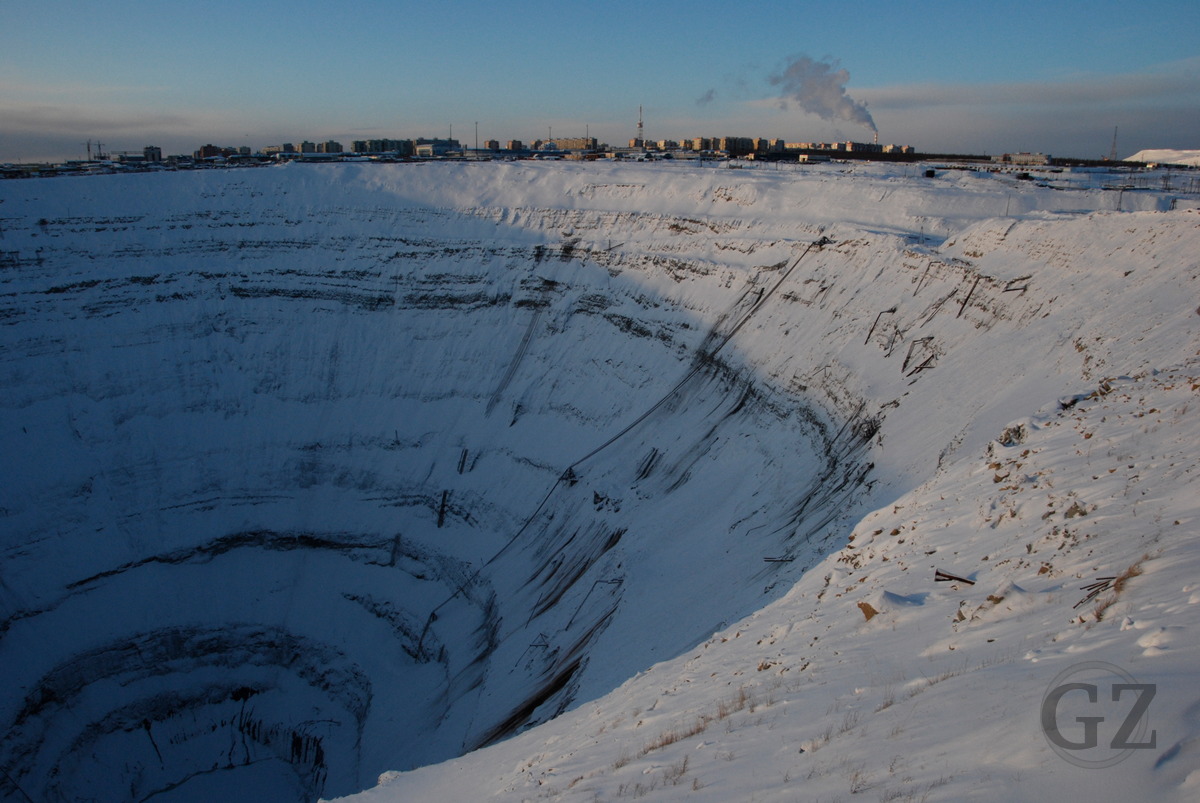 Last week I had the pleasure to attend a course in Sakha Republic (Yakutia), in the Russian Federation. The course within the thematic area of extractive industries brought me to Mirny, a small city which has been built around its mining activities. Since Russian geologists have found rich diamond deposits in the Republic of Sakha, Russia has become one of the world leaders in diamond production. Also Mirny is significantly shaped from the extraction of diamonds in the area ..

The following report was originally written for the blog on our project website (http://husarctic.org):

A Short Ethnography of a Pile of Money and a Deep Hole in the Ground: Diamond Mining in Mirny

Regarding economic development in the Arctic there is the widely spread interpretation that some places may be able to benefit from extractive industries activities, while others may not. During the UArctic PhD- and Masters course “Resource governance between global theories and local approaches”, which was held from 16th to 22nd of February 2016, we visited Mirny in the Sakha Republic (Russian Federation), which many may perceive as one of such places where the benefits are preponderant.

Development of Mining in Mirny

Founded in the 1950s, Mirny has become one of the world’s most important origins for diamonds, making the Russian Federation one of the global leaders in diamond production. As one fellow student stressed upon our arrival at the local airport: “Wow, it is hard to imagine that approximately a fourth of the world’s diamonds were going through this small airport.” In the aftermath of the second world war, when the first diamonds were discovered here, there was no permanent settlement on the ground where today some 30.000 inhabitants with over 70 nationalities are living. Although the city is now connected with a 1000 kilometer long road to Yakutsk, the main means of transportation to reach the city remains by air. For this purpose the Russian company Alrosa, partly state owned and world’s biggest diamond producer, even runs its own airline. Amongst other destinations, the  mining company’s air transport division offers flights to connect the small and remote city with the metropolis Moscow directly. While the pioneers, as the first geologists exploring this region are called, were living in ordinary tents even under the most severe conditions, with temperatures as low as -60 degrees centigrade, today a modern city with proper infrastructure can be found. Since the mine was established, permafrost has been one of the biggest challenges in developing the local resource extraction. The director of Alrosa’s research and design institute Yakutniproalmaz explained us proudly that all the knowledge on how to develop the diamond extraction in these harsh conditions has been learned from scratch and independently by Russian scientists and engineers. When eventually abandoned in 2001, the Mir mine has become the world’s second deepest excavated hole and fourth deepest open pit mine in the world, with a depth of 525 meters. Due to the harmful impacts of explosives on the diamonds, the open pit mine has been closed in favor for less destructive exploitation technologies. Today the kimberlite is extracted through underground mining, which in Mirny is carried out beneath the closed open pit. This way bigger diamonds can be produced. Permafrost was not only challenging the development of the kimberlite extraction, but also brought along some advantages: For example, only due to the permafrost it was possible to have the world’s steepest slopes in an open pit mine. The permafrost thus also became a driver for technological progress. Since treating the waster water turned out to be quite difficult under these cold conditions, already in the 1970s a closed water circulation has been implemented, making processing the ore more environmentally friendly. Representatives of the mining company Alrosa pointed out that environmental concerns are generally taken serious. For example, one quarter of the fleet of mining vehicles is powered by methane gas, which originates in the region. The energy intense industry is furthermore supported by electricity from three hydropower plants, of which the 2004 opened Svetlinskaya is the first hydropower plant that has been completely built into permafrost.

The Alrosa company is omnipresent in the city, hardly any signs can be found that would not carry the company’s logo. With proud the director of the Yakutniproalmaz institute explained us that “everything you can see in Mirny has been made by us.” Indeed, the economic input of the company is important for the whole Sakha Republic, to which Alrosa contributes 24% through its taxes, even if the majority of the revenues are transferred to the state. During the Soviet time the company was also responsible for several public services for its employees. Since the end of the Soviet Union, most services have been outsourced to the public administration. Generally, all companies with licenses to extract the resources of the Mirny region are tied to the Agreement for Social and Economic Development of the Republic of Sakha, which obliges them to financially contribute to services such as the education system, health services, or cultural institutions. In a guided tour through the Mirny Polytechnic Institute, a branch of the North-Eastern Federal University (NEFU), and which also served as the host organization for our course, we were shown a couple of different laboratories that are used both for training purpose of the students as well as for conducting research. Not surprisingly, the focus of the Mirny Polytechnic Institute is clearly laid on mining and hydrocarbon development.

The representatives of Alrosa furthermore explained us that their corporate social responsibility not only concerns the population of Mirny, but that also the original and indigenous population of the region is being considered when new projects (i.e. new extraction sites or new infrastructure) are developed: In public hearings the affected people can express their concerns. In the opinion of Mr. Yuzmukhametov, the head of the Mirny region, the involvement of the indigenous communities works well as there haven’t been any law suits brought to court yet. Since in our contemporary world most people, including the local indigenous people, possess mobile phones, they are able to document environmental or other problems. Unfortunately, during our trip we have not been able to meet any representatives from the indigenous communities to also get to know their point of view. However, one representative of a local environmental NGO approved that public hearings take place and that in some cases project plans had to be adjusted in order to meet the interests of the indigenous communities. These procedures are also necessary in order to follow federal legislation, and new projects can only be granted after a review process under the state’s authorities has been carried out. Representatives from Alrosa assured us that at new project sites also archaeological research is carried out.

Today the economy is more diverse and does not depend on diamond mining only. Currently eleven companies hold licenses for resource extraction in the Mirny region, of which Alrosa is one of them. Increasingly the extraction shifts toward the development of oil and natural gas extraction, whereas the economic share of the diamond production decreases; a trend which is expected to continue. Since the city of Mirny was found in the 1950s, the various activities of the extractive industries have brought around 1 Million people into the region, of which a good share decided to stay: At present the Mirny region is inhabited by some 72.000 people. The entire region is economically heavily depending on the extraction of non-renewable resources. Asked if and how the city is preparing for a time when these resources will be depleted or in case its demand would drop, the head of the Mirny region emphasizes that this may still be far in the future and that hopefully by then it will be possible to benefit from the region’s rich culture and good education.

While our official program was dominated by meeting representatives of Alrosa, the Polytechnic Institute, and the public administration, in our free time we also got to meet some permanent and temporary residents of the Mirny region. While not having representative character, some impressions were less positive than the ones the official representatives communicated. For example, some of the inhabitants have complained that the income from mining is too low for most of the local population, particularly regarding the hard and dangerous work, which in some cases even led to fatal accidents. Consequently, live is hard to finance. Buying an apartment is as expensive as in St. Petersburg, and many goods, such as fruit, furniture, or cars, are locally hardly available. Traveling to other places where these goods can be bought is expensive as well. Some locals have raised concerns about the environmental impacts of the industrial activities. According to one local, the air lacks oxygen when compared to other places. On the way to the airport, near one of the mines, sulfur can clearly be smelled, which also has been perceived as olfactory pollution. As another inhabitant, who grew up in Mirny, explained us upon our arrival: “This is the smell of Mirny!” In cooperation with the Polytechnic Institute, a new water treating facility is being developed which should decrease the mining related contamination of the ground water in order to get better drinking water locally.

The visit to Mirny was a very interesting experience, showing us a young and modern city, which was founded on the revenues from and the development of the region’s mineral wealth, which is designated for export rather than for local consumption. For many inhabitants and immigrants the city of Mirny created a place for being and feeling home, and which even in a remote location makes modern life possible. Nonetheless, also negative impacts of industrial activities, such as environmental degradation, is obvious and partly of concern of the local population. The representatives of the mining companies and public administration were eager to show us a prospering region, where the extractive industries live up to international standards and best practices in regard to socio-economic and environmental impacts of their activities. While it needs to be assumed that this development must have produced competition over land and resource use with the local indigenous population, the resources extracted are of strategic importance for the Russian Federation. It was unfortunate that during our one week visit to Mirny we have not been able to meet representatives of the indigenous population, to also get to know their opinion and view on the establishment of the city and its associated impacts.