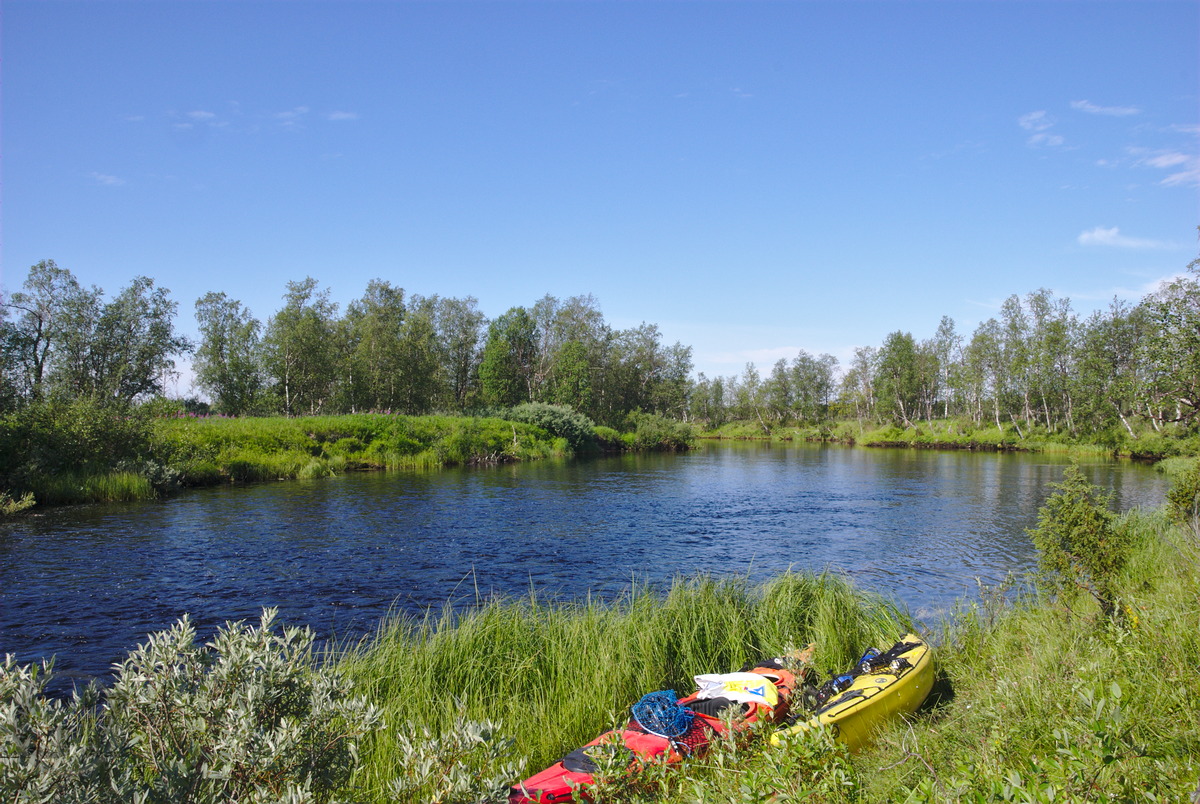 Last week together with two friends I went for a short trip, starting in Kalmakaltio, going down Käkkälöjoki river by Kayak. It turned out to be the hottest days during this summer, so we chose the right time to spent on the cool and refreshing river water in the Pöyrisjärvi Wilderness Area ..

While the polar day has ended a few weeks ago, the hottest days of this summer just arrived last week. So far most of the summer has been rainy until recently the sun came through and brought along heat. Fortunately this was at the same time when two friends and me decided to go for a kayak trip in the Pöyrisjärvi Wilderness Area.

After renting and picking up some kayaks from Hetta Huskies we organized a ride to Kalmakaltio, in the eastern part of Pöyrisjärvi Wilderness Area, where we put the boats into the water and started our short trip. The first night I slept outdoors under the open and clear sky, but for the second night we decided to stay in the Nallatupa open wilderness hut, since it was along our route. Originally our plan was to be back south, where the road between Vuontisjärvi and Peltuvuoma passes by, after the third day. However, a forecasted thunderstorm made us decide to stay an extra night in the hut rather than on the water. After the thunderstorm passed, there still were some hours of daylight which we used to paddle up Suukisjoki, to enjoy the beautiful river and shoreline from the water perspective.

While the weather forecast promised only rain for the next day, we again ran into lightning on our way south, which forced us to get out of the water. As it turned out, we were less than 2 kilometers from the road, so we were already considering walking the rest of the way and to pick up the kayaks on the following day. Nonetheless we eventually decided to wait out the lightning, before we finally were able to bring the kayaks and ourselves back safely to the road, where we got picked up again by a friend of one of our group.

Now some days after our return and the arrival of early autumn it turned out that we took advantage of the hottest days during this summer, spending on the cool and refreshing water of Käkkälöjoki. Since the water level was higher than normal (due to lots of rain in the weeks before), we found good conditions for kayaking, and really enjoyed our trip through the Pöyrisjärvi Wilderness Area – on water.

Since my camera stayed most of the time in the front compartment of the kayak, properly sealed in a dry bag, there are unfortunately not many pictures I can share from this short trip :-)