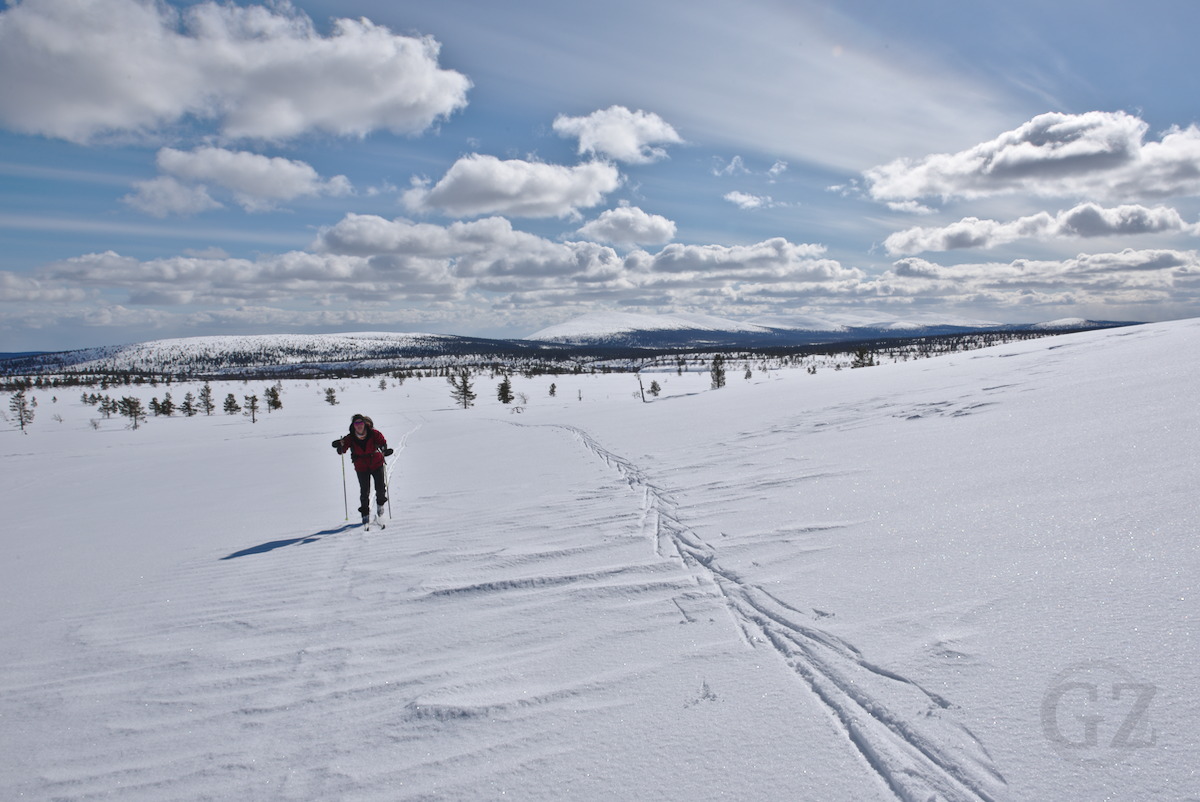 While the temperatures so far haven’t went over 2 or 3 degress plus, the forecast for the next week suggests that the skiing season will find an early end this spring. Time to enjoy a last trip into the nearby fell area, and to combine that with a sauna turn in Hannukuru, in the middle of Pallas-Yllästunturi National Park.

Lately the the snow already started to became firn during the days and a bit icy in the evenings and nights, but nonetheless the snow was generally still in good condition. There’s still something between 50 & 70 centimeters, so plenty for back-crountry skiing activities. One of the nice snow characteristics at this time of the year is that due to the melt/freeze cycles the top is hard and it is easily possible to use regular cross country skiers to go wherever you want. And we wanted to go into the fell area for probably the last time this season, as the forecast for the coming week threatens the snow cover with temperatures of up to eight degrees plus.

It was easy for us to decide to take this likely last opportunity to ski into the Pallas-Yllästunturi National Park, and to stay for a night in Hannukuru. This would allow us to enjoy one of the nicest saunas I know, and which is located in the vicinity of the Hannukuru open wilderness hut.

Due to the warm temperatures there’s no need to carry much clothing or a thick sleeping bag, making the luggage rather light weight. Since there should still be (to some extend maintained) skiing tracks existing, choosing classic cross country skiers should make it easy and fast to get to Hannukuru. Thus one can start from Hetta in the afternoon (4 in our case) and still easily make it to Hannukuru for the evening. In any case, since the sun doesn’t set before 10pm and the nights don’t get completely dark anymore, time is anyways relative as you won’t get lost in the darkness. In any case, we seemed to be good on time: Just after we finished our supper in the open wilderness hut, we could walk straight into a heated sauna, since other skiers that were also staying in Hannukuru had already heated it up and used it. Very comfortable for us!

For our return to Hetta on Sunday we thought that we would start earlier into the day, and instead of following the skiing tracks, we could make some detours to climb fells or visit other places with nice views. Thus, after passing by Pahakuru we followed the summer trail almost all the way to the Siuskuru open wilderness hut.

After passing through the beautiful Haaravaarankuru we split up, as I didn’t yet want to go home, but first to also climb to the summit of the Pyhäkero fell. While doing so I started to get a bit into a hurry, as the sun, which was shining brightly since the morning, slowly seemed to get sparse. Nonetheless, I managed to reach the summit of Pyhäkero still in bright sun light, while the look back to the South and to the Pallastunturi fells already exhibited the effects of absent direct sun light.

After a short break and enjoying the wonderful view, particularly toward the fells in the North, in the Pöyrisjärvi Wilderness Area, where I have been back-country skiing earlier this winter, a feeling of saying good bye overcame me, as I figured it might have been the last time until December to move around in this area with my favorite means of transportation: on skiers.

After an unspectacular yet fun downhill on icy classical XC tracks, also crossing lake Ounasjärvi became somewhat sentimental. Will it be the last time this season to ski over a frozen lake? While in the past I have been crossing the lake on skiers as late as mid May, the weather forecast and the generally warm winter this year made me afraid (once again) that it could be the last time for this season.

That said, skiing to Hannukuru in spring, off the regular skiing tracks during fantastic weather was probably a very worthy last skiing trip for the season!