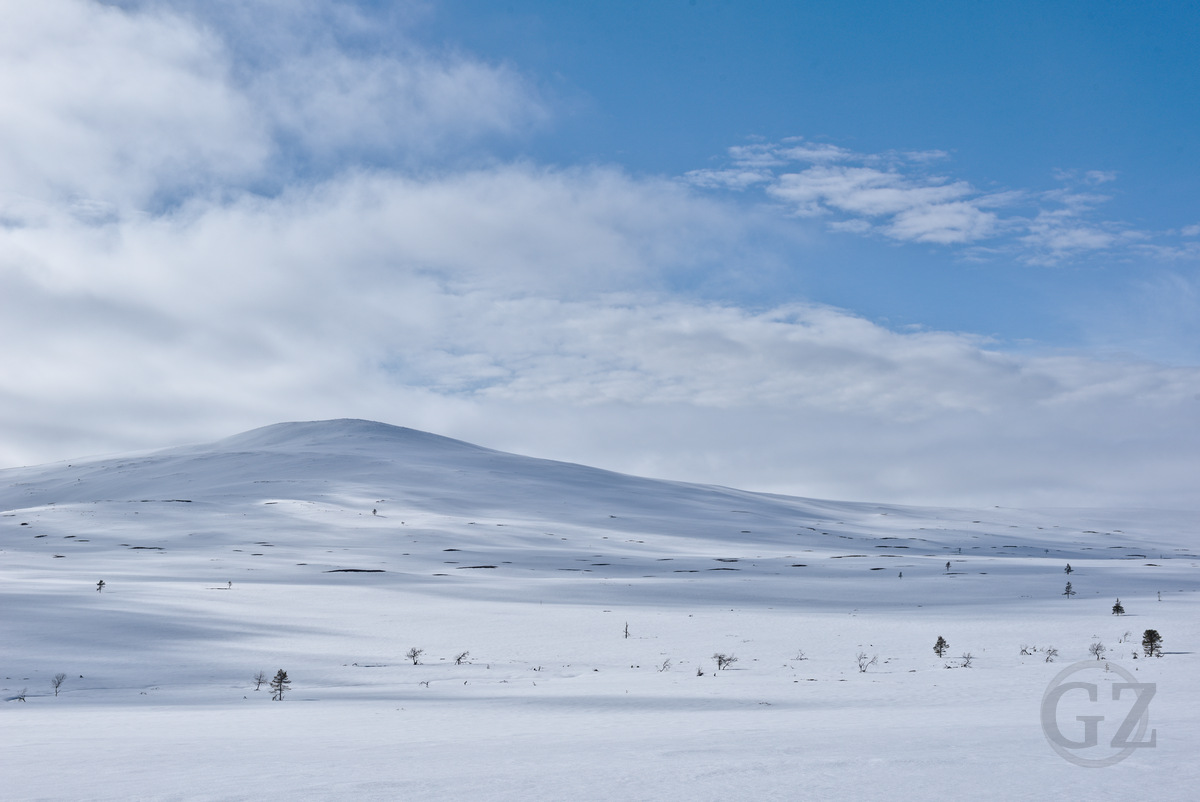 After my recent one week skiing trip to Porojärvi, it seemed that the weather would allow for yet another short skiing trip in the Enontekiö area. As I haven’t visited Hannukuru during this season, the sunny spring weather suggested that – almost as a tradition – this could be the destination for the season’s last skiing trip. When going there, it appeared reasonable to also take a day to ski up Outtakka and have some fun with downhill skiing as well ..

This spring was quite interesting, weather-wise. In recent years the first warm spring days were followed by another cold wave. This typically creates a hard snow surface which allows for easy skiing through the forests. However, this year after the temperatures went above zero, it stayed warm and the snow in the forests hardly carry the weight of a skier. Thus it seemed appropriate to ski further up the fells. Consequently the plan was born to ski up Outtakka. This seemed particularly appropriate as we could stay in the nearby Hannukuru open wilderness hut and enjoy the wonderful sauna there. Thus, visiting Hannukuru once again became the last skiing skiing trip of the season.

Old skiing tracks on the way to Hannukuru

Because of the warm weather, this year there was no hard layer on top of the snow. Especially in the forest, and even with long skiers, I experienced to break through already the week before the planned trip. Thus it did not seem feasible to start the skiing trip from Hetta. Instead, with Heidi, we decided to drive to Vuontispirtti, in the south-east of Enontekiö, and to start our short weekend-skiing trip from there. Vuontispurtti is rather close to the eastern hillside of the Pallastunturi fells. It is thus a rather short distance to get above the treeline. It is also closer to the Hannukuru open wilderness hut, which hosts one of my favorite saunas. Yet, taking advantage of our fell skiers, our final destination was to reach the summit of Outtakka, for some fun final downhill fun this season.

Starting from Vuontispirtti, the snow indeed was warm and soft. Nonetheless, on the compressed snow of the old cross country skiing tracks it was no problem to ski also in lower altitudes. Also the lakes and rivers in the valley were still snow covered, and so we rather quickly made our way through the forest and up to the Hannukuru open wilderness hut.

After spending one night in the open wilderness hut, our plan was to use a day with forecast sunshine to ski up the Outtakka fell. In the morning, though, it was still quite cloudy. When passing by Pahakuru we thus had an early break and prepared some lunch. The walls of the hut furthermore provided a perfect shelter from the upcoming wind. Once we left the hut, to our surprise the sun has partly come through. The closer we then came to Outtakka, the more sunshine we got. The downside though being that the snow immediately became warm again, after the night had made it a bit harder. Now, in the sun, we were occasionally breaking through the warm snow. Nonetheless, we managed to ski up Outtakka.

After enjoying the nice view from the summit of the fell and taking a short break, we had lots of fun to ski down. Even though enjoying the downhill, we did not ski up for a second time, as we were looking forward for a relaxing evening in the sauna at Hannukuru.

From snow to water: When the skiing tracks started to flow away

Up in the fells the occasional breaking into the snow was our main concern. Yet, after a day of sunshine and yet another warm morning (the thermometer at Hannukuru showed 12° Celsius (!)), the snow conditions deteriorated quickly. When skiing down from Hannukuru towards Vuontispirtti even the compressed skiing tracks had become weak (beside being ruined from some snow mobiles that used the tracks over night). Parts of the skiing trip now turned into quite some challenge. Near Suasjärvi the skiing tracks in fact turned into a brook. This forced us to make some efforts and detours to avoid getting wet feet (which, actually, we couldn’t avoid). In fact, in some spots the snow has turned into a brook already: Below the top layer of a few Centimeters of snow there was only slush left that hardly carried the weight of a person. Or a pulk..

It became quite obvious that this was going to be the last meters of moving on skiers for this season. #SoSad. So we felt quite comfortable to say that we indeed took advantage of the very last weekend – or even day – when skiing was still possible this winter/spring. Yet, visiting Hannukuru, going to sauna there, and especially skiing up (and for the fun part: down) Outtakka proofed to be a satisfying and enjoyable celebration of the final moments of this years skiing season.